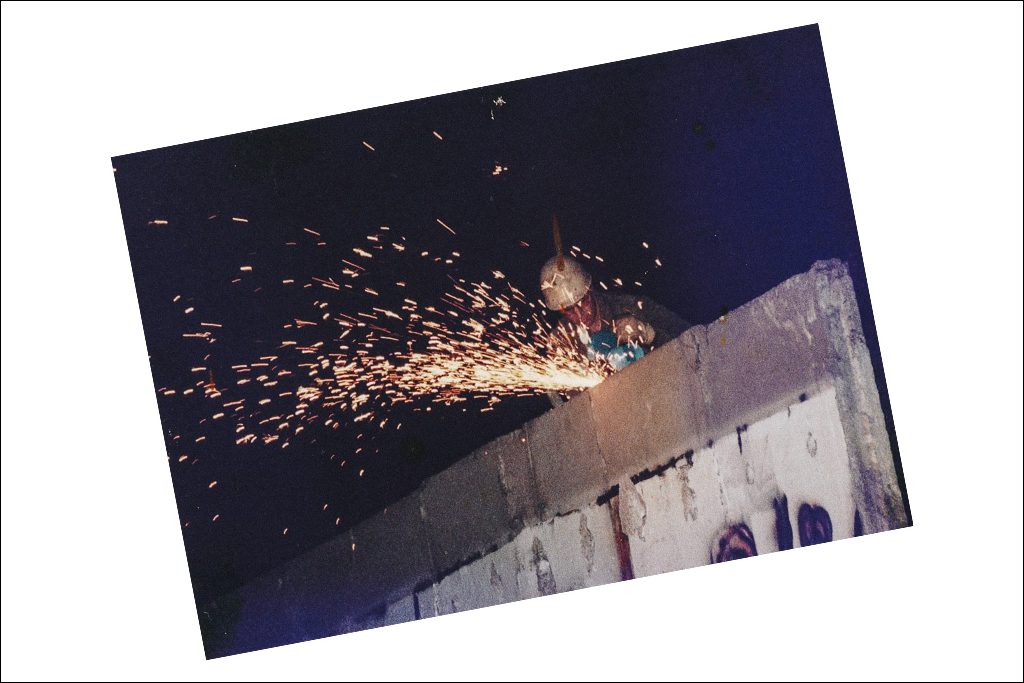 Walls
One thing this almost indescribable experience taught me is that walls are able to arouse strong feelings with remarkable ease – especially when they are pulled down. For sure this can happen as well when they are build up – needless to say in a negative sense. Most of the walls and fences within the EU have been dismantled in the last twenty years or so. In many cases the walls in people’s minds have been torn down to the same extent as well. Unfortunately, some of these walls obviously were strong enough to withstand time and change – others have been build up in no time at all, as it seems. The walls in our minds now become a severe problem again – they restrict our horizon and they keep the view on the point out of sight. Moreover, these virtual walls will build up real ones again, as seen nowadays in some parts of Europe. Foolishly, the hope that fences can stop people who are fleeing from war, violence and hopelessness, is both naive and immoral. It has nothing to do with protection or defense of a single country or the EU – we are not being attacked by refugees. It’s simply the ongoing attempt of walling-off our prosperity in Europe against the others as well as the overlooking of a global and ethical responsibility we all have – in some cases as well as a historical one. The problem of this approach is well described by the words of a world famous physicist: ‘Insanity is defined by doing the same thing over and over again and expecting different results’. As it is impossible to see through walls, they are so popular. It makes us feel not invented here. The only possible outcome of this vicious circle is to open the eyes and to establish a new thinking without prejudice and unfounded fear – as well as to tear down the walls. Fortunately, many people all over Europe have already done this not least with their selfless help or the life-affirming culture which have become known as ‘Willkommenskultur’ not only in Germany.

Media
An important question is about the role of the media in the way people form their opinions on all this. To come to the point first: This is not in the least concerned with some of the very extreme excrescences we are witnessing today as brainless form of media bashing. The empty-headed running in the streets and chanting ‘Lügenpresse’ (‘lying press’) in Germany are stupidly mixing up lies with the known dilemma of inadvertent or deliberate opinion-making being inherent for all forms of publishing – apart from the fact that the expression ‘Lügenpresse’ should be out of question due to its use in several historical contexts, not least through the Nazi propaganda. However, my point here is the view on the responsibility media and press have in people’s perception of reality. Without a doubt, freedom of press and opinion are of tremendous value and one of the pillars of free societies. Besides this, it might be questionable if freedom should not entail responsibility at least to a certain amount – similar to the principal of ‘property entails responsibility’ which for example has been established in the German Constitution. This does neither mean to restrict the press nor to expect getting always just objective information – whoever defines what objective is. It only describes the idea of establishing a greater awareness of corporate societal responsibility press and media have. If journalists ask a hundred times, if people fear islam, refugees and the loss of their identity, they will do so one day for sure. If media always is pointing out just the bad of everything this will shape the entire image of it – and images remain strong and lasting in human’s minds. Consequently, the often-heard reference to media’s duty for objective reporting is no comprehensible argument – there is no prohibition on telling good stories or asking the people for hopes and opportunities as well except the fact that this doesn’t sell. Media never was objective and never will be. Transferring the original wording of Heisenberg’s uncertainty principle into our everyday experience, each and every journalist reporting about a story is part of it. Thus, finding the balance between the obligation of reporting and the selection of topics and questions is the real challenge the media have to cope with – and this is an awesome societal responsibility. Is there a practical way to claim this? No, I don’t think so. However, a public discourse would be a very good beginning… I’m still deeply convinced that words and thoughts can change the world. 😉

Moral
What does moral have to do with all this? Well, obviously quite a lot, because moral will define the way we are coping with these challenges. The US American reporter Webb Miller is said to have framed the following sentence – of course in a different connection: ‘Whatever moral ascendancy the West held, was lost here today.’ I think Europe lost whatever moral ascendancy it ever might have had (I would rather call it moral values) already for so many times in its history. We should keep in mind, however, that the next time we lose it again could be once too much. History never forgets…